GOC of 11 Infantry Div. distributed Blankets among the distressed people 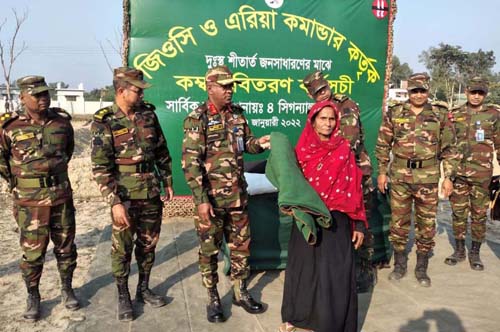 High Official of Bangladesh Army told the correspondent that on the directives of the chief of Bangladesh Army, warm cloths like blankets distribution and many humanitarian and public-service activities have been conducting among the poor, distressed and cold-victim people across the country.

Following such humanitarian activities, the head quarter of 11 infantry division has donated blankets of the area of Sherpur upazila in Bogura district.

Elderly women and men have expressed their high rejoice after getting the blankets and they prayed for Bangladesh Army and hoped that Bangladesh Army will continue their such benevolent activities in the root-level areas.

Earlier, 11 Infantry division has distributed warm cloths among the poor and cold-victim people of Baghabari under Sirajgonj district and other locations of northern parts of the country in the last few days.

The Bangladesh Army has also conducted free-medical campaign in Joypurhat district under the area and provided medical treatment and medicine among the people of the district.

In the warm cloth distribution programme, the high army officials under Bogura and Jahangirabad Cantonment, Bogura, were present in the spot.