Press conference demanding recount of votes in Dupchanchia UP election 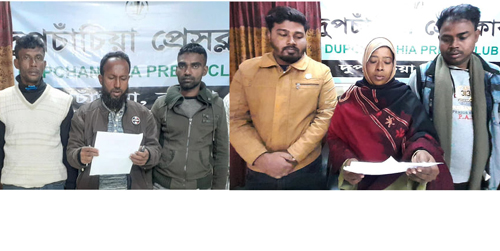 Two candidates, General Ruhul Amin (Tala) and reserved General Razia Bibi (Tubewell) have arranged separate press conferences at Dupchanchia Press Club at 11am on Friday, alleging fraud in the counting of votes in Ward No. 4 of Dupchanchia Sadar Union Parishad and demanding recount of votes.

In a written statement at the press conference, Ruhul Amin (Tala), a general member candidate of Ward 4, said that the polling was held in a fair manner at Karamji High School Center, Ward 4, Dupchanchia Sadar Union on Wednesday, January 5.

After that, Feroze Ahmed was declared the winner by 29 votes through fraud. Despite protesting and demanding recount of votes, the presiding officer and his men left the center with the assurance of recount of votes in the Upazila Parishad.

He protested and demanded a recount. On the other hand, Razia Bibi (Mike), a reserved female member candidate of wards 4, 5 and 6, has held a separate press conference with the same allegation. At the press conference, he said that despite winning the 5th and 6th wards by a huge margin, the presiding officer of the 4th ward has declared Nasreen Begum (pen) as the winner.

He protested at the polling station and demanded a recount, but it was not done. They have left the center with the assurance of counting the votes in the Upazila Parishad. He also demanded a recount of votes.