Delicious rasgolla made with molasses in Rajshahi 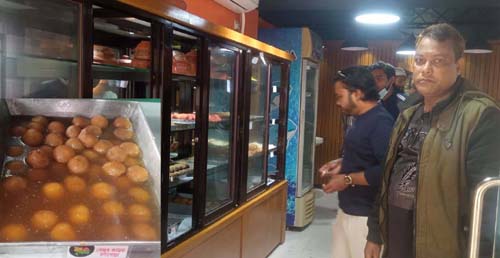 The Bengali tradition is mixed with Rasgolla. It is known from history that Haradhan Moira of Phulia in Nadia district of West Bengal, India is the creator of Adi Rasgolla. However, Navin Chandra Das invented the modern sponge Rasgolla. It is said that Columbus of Rasgolla, Naveen Das of Calcutta. 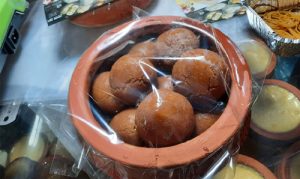 However, according to experts, the origin of Rasgolla is in Bhandaria of Pirojpur. During the time of the Portuguese, the Moiras used to make rasgolla with lamb, sugar, milk and semolina in Bhandaria. The descendants of these Moiras later settled in West Bengal, India. They spread rasgolla everywhere.

Rasgolla outlet has been launched in Bhadra Rail Crossing area of ​​the city on December 30. I went there at 2 pm on Thursday and saw the hanging outside – ‘Rasgolla’s stock is over, you will get it again tomorrow.’ People were still waiting outside. Many of them came to eat or take rasgolla.

Vishal, a student of RUET, was going out with friends to taste Rasgolla. He said that date molasses rasgolla is now ‘Talk of the Town’. They plan to go to Rasgolla while having tea with friends on campus. He was fascinated by the taste of Rasgolla. Not only sound but his alertness and dedication too are most required.

Faisal Kanak, a student of Bangla Department of Rajshahi University, came to taste Rasgolla. He is a resident of Hadir Mor area of ​​the city. Kanak said that he came to know about the matter through social media. On the way, he saw people standing in line eating rasgolla. Usually sweet shops do not have such a crowd. After waiting for half an hour, Rasgolla got it. After tasting it, he thought, the wait is worth it.

Puppies are the lifeblood of making rasgolla. The pure milk of their farm has made Rasgolla unique. Rasgolla’s entrepreneur Arafat Rubel confirmed the matter. He also has a cattle farm called Saudagar Agro.

Arafat Rubel said his cattle farm produces 300 to 400 liters of milk per day. He made puppies with the whole of that milk. From it various sweets including rasgolla are made. As the demand increases, they are taking initiative to raise cows on the farm without collecting milk from outside.

SM Rabiul Karim, co-founder of Rasgolla, said other sweet makers buy chickpeas. But we make puppies from the pure milk of our own farm cows. As a result, all the sweet flavors including rasgolla are unique. Our first outlet has been launched in Bhadra Rail Crossing area of ​​the city. Initiatives have been taken to open another outlet in the suburbs of the city due to increasing demand.