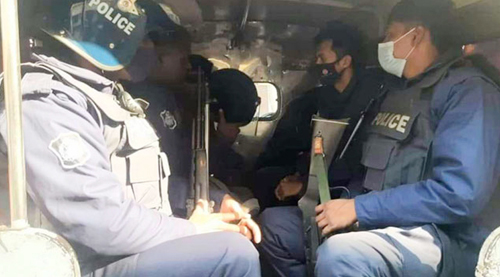 The sentence was handed down by Executive Magistrate and Upazila Nirbahi Officer (UNO) of the mobile court Nurul Hai Mohammad Anas on Wednesday  at noon.

The two convicts are: Ismail Hossain and Samrat Ali. Their home is in Namazgram of Puthia upazila. After sentencing, the police arrested them and took them to the police station. They were sent to Rajshahi Central Jail in the afternoon.

Earlier, the polling was canceled at Dighalkandi Government Primary School in Baneshwar Union, Rajshahi due to forced entry and sealing of ballot papers.

On the other hand, the police have arrested two persons for entering the center of Baneshwar Islamia High School and sealing the boat. Besides, after the commencement of polling, clashes and clashes took place between supporters of Awami League and rebel candidates at Joykrishnapur Center of Maria UP in Durgapur Upazila of Rajshahi. Three people were injured. The clash took place outside the center between activists and supporters of the two-member candidate.

Voters have also been barricaded outside a few polling stations in Puthia and Durgapur in Rajshahi and counter-chases have taken place over the issue of domination.

After the polling started at 8 am on Wednesday, the election in 19 Union Parishads of Rajshahi has ended with some isolated incidents.

However, law and order forces are working in the field to keep the voting environment normal in Rajshahi. Apart from police and RAB, BGB is also on the ground as a striking force. There is also a mobile court headed by an executive magistrate.