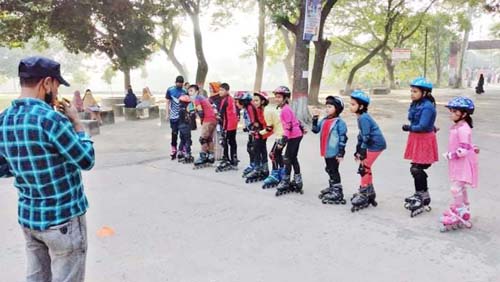 Skating have earlier practiced in the cold countries and it has been getting popularity in the plain lands like our Bangladesh. As a game, it is also becoming as sports. The sports men of Bangladesh have been showing much performance in the competition.

Following the popularity and the well performance in the competition, the children of Bogura have been getting interested to Skating and the guardians have also been interested to send their children to the training club.

Skating trainer Ashraful Islam Rohit said that the skaters can reach in their destination with speed and such practice as it is an exercise can help us a lot to keep their children’s body fit but the elderly people fear to see such endeavour of the youngsters. Skating has been flourished in all corners of Bangladesh beside the capital.

At least 40 younger learners aged 06-15 of different schools of the town have learning skating under the skating club and have already been showing their extra-ordinary performance so far.

The trainees said that their trainer Rohit has been training their hand to hand and they have been progressing rapidly and can run wearing skating shoe with great speed.

A learner of Dhaka Roller Skating Foundation said that she has been learning skating beside her academic study and have been preparing herself for different competitions related to skating and she hoped that the skaters could keep their physical health up to 60 and the foreigners have been keeping their body fit through skating.

Guardians of the children said that initially they feared a lot of skating but they could overcome the fear and later they could understand the real meaning of skating and its benefit of physical exercise.

Trainer Rohit said that due to corona pandemic, the children have become mentally sick as they could not go out but to defeat such mental sickness, skating has been playing great role and its importance knows no bound.

There are two types of skating and the skaters can participate in different kinds of games and sports and before learning skating, the learners should practice physical exercise and techniques and helmet and safeguards are must while practicing, added the trainer.