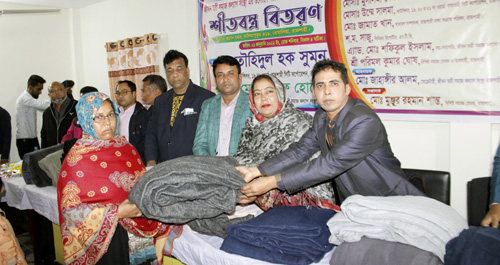 Winter clothes (blankets) have been distributed in Rajshahi metropolis on the initiative of Jeevan Tari Samaj Kalyan Sangstha.

On Saturday (January 1) at 4 pm, blankets were distributed among the poor, helpless and destitute at the initiative of this organization located in Bhadra Mor area of ​​the metropolis. The blankets were handed over to 70 people from different wards of the city by the chief guest, special guests and leaders of the concerned organizations.

Md. Maruf Hossain, President of Jeevan Tari Samaj Kalyan Sangstha presided over the function. He said that it is a non-political voluntary social welfare and non-profit organization. Our main goal and objective is to stand by the side of poor and helpless people.

He further said that such welfare activities will continue to the best of our ability.