no one keeps track of Kajal Kumar 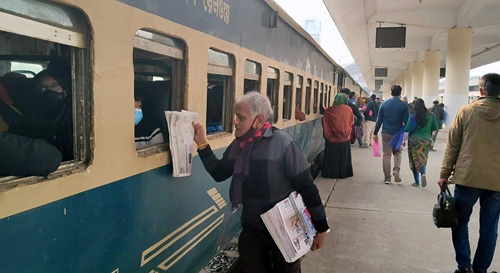 News peddler Kajal Kumar has been selling newspapers in Rajshahi Railway Station and Bus Terminal area for over 50 years. Kajal Kumar’s two younger brothers were also news peddlers but in the evolution of time they have joined different professions and changed their own destiny only Kajal Kumar remained.

Every day from morning to afternoon he delivered the news in the hands of the people and then in the afternoon he came to the railway bookstall and explained the account of the paper and returned to his house by ferrying the newspaper all day long. 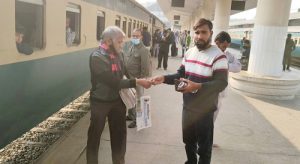 Asked about the current state of sales of newspapers, Kajal Kumar told Daily Asia, “People don’t want to buy paper anymore. Even though everyone is busy with mobile phones, there is no sale of paper at all. There was no work in Corona.

Khukhi was the only female newspaper vendor in Rajshahi. Her husband left her due to her mental disability. Her son did not even contact her because of her madness. But Khukhi chose to run her life. After the Prime Minister announced his resignation, various individuals, organizations and voluntary organizations, including Rajshahi, came forward for the girl. Near.

Khuki has been assisted by the Prime Minister, but Kajal Kumar has not. Hekmat Ullah Bookstall, one of the distribution houses in Rajshahi, is located at the railway station.

When asked, he said, “I have been seeing Kajal Kumar selling paper from our house since I was a child. His family is living by selling newspapers. He is a very poor and helpless person. He is currently suffering from eye and foot problems. 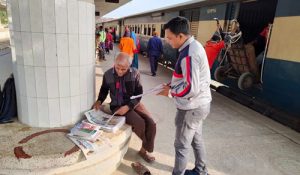 “We try our best but we can’t solve all his problems, but sometimes the railway authorities stop him from selling papers at the station premises. I try to help him because if he can’t sell the paper, he won’t eat,” he said. He has two sons but they do not see their parents busy with their family.

Kajal Kumar said, “I was 12 at the time of 1971. I have been selling papers at the station since I was 12 years old. I had to leave at noon. After selling papers on Kopotaksh, Barindra, Tungipara Express and Silk City trains, I returned home in the afternoon after depositing the remaining papers at the bookstall.

Paper used to be sold on commuter and comet trains in the evening but now no one buys paper at night and now he is old and has tears in his eyes and foot pain so he doesn’t come at night anymore, he said.

He said that now his body is not moving like before and his eyes are blurred and he sometimes feels pain in his chest. He used to get some money from the Hawkers Association for his illness but now he is not getting anything.

He said, “I once received a reward of 100 rupees from Mr. Hekmat Ullah for selling paper. I did not reach out to anyone but now my body is not good. I used to.

If you want to know about Kajal Kumar Rajshahi Deputy Commissioner. Abdul Jalil said that if he falls ill, he will have the opportunity to receive financial assistance from the government medical fund up to a maximum ofTK 50,000, but in that case there is a pattern, he will have to go through cancer, liver or kidney problems, etc. I will provide financial assistance.