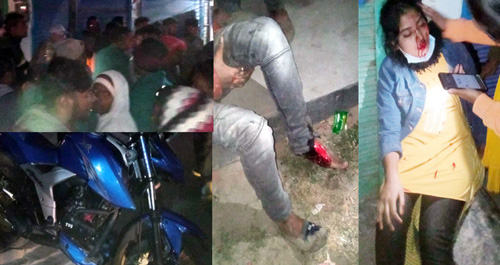 A young man & a young woman riding a motorcycle were seriously injured in a collision with a private car in Rajshahi metropolis.

The accident took place on the Dhaka-Rajshahi highway at Kajla Octroy under Motihar police station around 10:30 pm on Saturday. However, the driver of the private car increased his speed and fled, but the locals identified the car.

According to several locals at the intersection, two young women and a young man were on their way to Talaimari from Kajla under Motihar police station on a motorcycle (TVS). At that moment, a speeding white private car coming from the side of Talaimari pushed them at the Kajla Octroy intersection and sped away. The bike rider (22) broke the leg bone. At the same time, a 16-year-old girl riding a bike was hit in the head and her nose and mouth were blown out.

Upon receiving the news, the police of Motihar police station came to the spot. However, with the help of locals, they left for Rajshahi Medical College (RMC) Hospital by auto rickshaw. The injured have been identified as students of Kashiadanga College in the city.

When asked, Second Officer of Motihar Police Station SI Taj Uddin said that the young men and women riding the motorcycle were seriously injured in the collision of the private car. At present they have admitted RMCH. Although it was not possible to seize the private car, the locals have identified the private car.

He also said that the operation is going on to stop the private car.