Largest mural of Sheikh Mujibur being built in Rajshahi 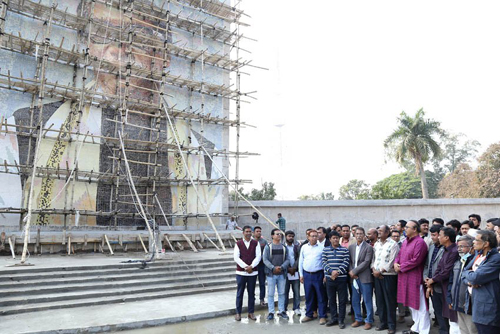 To create the hounur among the people of Bangladesh, the largest mural of Father of the Nation Bangabandhu Sheikh Mujibur Rahman is being built adjacent to the C&B Crossing area in Rajshahi city.

Rajshahi City Corporation (RCC) is constructing the country’s largest mural at a cost of around Taka 5.02 crore as part of its Taka 2,993-crore project titled ‘Integrated Urban Infrastructure Development in Rajshahi City’.

Mayor AHM Khairuzzaman Liton accompanied by others concerned visited the site to see for himself its progress today. RCC Superintending Engineer and Project Director Nur Islam told that height of the mural is 58 feet having a 50-feet height and 40-feet wide Bangabandhu photo in main part of the mural.

Terracotta works are being done on 700-feet space on both sides of the boundary wall. Gallery and landscaping will be well-decorated with super granite. Upon completion of the construction works, the mural will be night vision
with decorative electric bulbs.

Mayor AHM Khairuzzaman Liton said the mural will inspire people to know about Bangabandhu Sheikh Mujib along with his life, works and laudable contribution and sacrifice to the country’s independence.