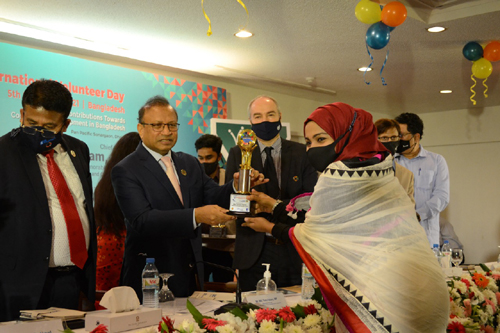 To acknowledge humanitarian deeds on gender based violence against Women & Girls UN country champion Volunteers Award-2021 has been handed over to the perfect personality formally.

The award is given for providing legal assistance to various women, children and adolescents girls who have been victims of violence.

Tamima Nasrin is a Human Rights activist, development worker, support to these survivors for  both psychosocial and legal has been honored the award.

Recently she has received this award for her multifaceted creative work, innovation, initiatives and bravery in preventing violence against women and children and community development. This Award was given by the United Nation Volunteers Bangladesh in the ceremony of International Volunteers Day on 5th December, 2021.

She is currently working at United Nation Population Fund as a District Facilitator. She has been working in Bogura district since 2019 with District Police Bogura and district women’s affairs department to prevent violence against women & children.

She has been providing various technical assistance including training to the police personnel of District Police to run a service desk for women, children, elderly and disabled at Police Stations and to create a women and child friendly environment in the police stations as well.

She has created a helpful booklet on Prevention of Violence against Women and Children, which contains various awareness messages, do’s and don’ts, punishment for crimes, various helpline numbers, and detailed information on where to get legal help against this violence.

The booklet is now very popular and acclaimed, reaching out to people in remote areas through various government and private offices. Even by calling the number in the booklet, the victim can stay at home and report the problem.

Notably She has also been promoting the use and benefits of National Emergency Number 999 to the people of marginal areas since 2019. Many housewives using this emergency number received immediate police assistance and the teenager stopped their child marriages. She has been honored by the Bogura District Police for this exceptional initiative.

Her role in developing the leadership of youth and contributing to the community by making the youth volunteer is appreciated. She has created Youth Volunteers in every upazila of the district. Those are known as ‘Youth Volunteers for Gender Equality.’

Today, more than a hundred young people in their respective areas organize courtyard sessions, awareness meetings and campaigns in educational institutions to prevent child marriage, dowry, sexual harassment, rape, and other abuse against women and children.

Not only that, they also regularly provide information to the officers of Women, Children, Elderly and Disabled Service Desk of the police station about the various abuses and help the victims to get legal help.

In 2020, when the whole world was stuck into Covid 19, People were home bound. Even then, Tamima Nasrin has shown her strong leadership. She has organized an international awareness campaign title “Campaign to Stop Violence Against Women and Girls during Covid 19.” The campaign was attended by 250 professionals and young leaders from 14 countries around the world.

She also has a Youth Lead organization called ” SheEqual” through which she is doing various voluntary work for the advancement of Women and Girls Rights. She dreams for a world where all human being will be treated equally from every sphere of life.