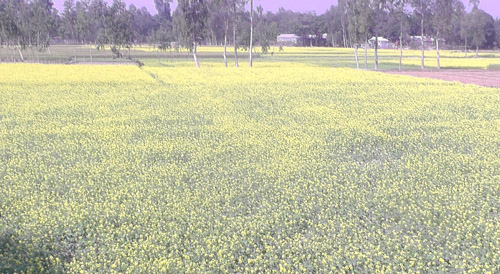 Yellow scenery is being seen in the villages especially in char areas of all the nine upzilas in Kurigram district at present. The farmers are also expecting the bumper production of mustard in this year.

The flowers of mustard are bloomed in full in vast tract of fields which attract to all. The visitors coming from town as well as Dhaka city become very glad observing the yellow scenery. Some of them are taking snaps in various style.
The farmers of these region cultivated mustard as advance basis to overcome the two spell of flood.

Kurigram Department of Agriculture Extension (DAE) officials said the target of mustard cultivation in 30 unions including char areas in all the nine upazilas at 13 thousand hectares of land in this year.The mustard will be matured after one and half months,farmers said. 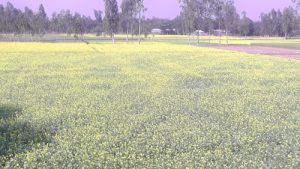 The farmer Mohammad Ali of Jatrapur areas under Sadarupazila told that I have cultivated on my 60 decimal of land of BARI-15 and BARI-18 variety of mustard. The highly blooming of flowers are indicating better yield. The cultivation cost is few but profit is more.

On the other hand, the farmer Mohir Miah of Bandober area under Roumariupazila said I have cultivated mustard in my lands like previous years and I am expecting for bumper production.The prices of mustard is higher than paddy and other crops in the market, he said.

Deputy Director of Kurigram DAEMonjurul Islam told that the farmers have cultivatedmore mustard than last year due to flood. The farmers have cultivated BARI-14, 15, 16, 17 and 18 variety and BINA-4 and 10 variety of mustard in the district. We are expecting for bumper production of mustard in this year if the favorable climatic condition and applying anti-insects in time.