An Indian citizen named Uttam Biswas (40) died at Bagmara in Rajshahi. He died in Cheokhali area of ​​Goalkandi union of the upazila around 3:30 pm on Friday.

Uttam Biswas is the son of Nilkant Biswas of Gangarampur area in South Dinajpur, West Bengal, India. Her ex-husband is a resident of Ullapara in Sirajganj. He came to Bangladesh on October 21 on a one-year travel visa.

This information was confirmed by Sub-Inspector (SI) Abdur Razzak in charge of Taherpur Police Investigation Center in Bagmara. He said the son of Saiful Islam, a resident of Cheokhali area in Gangarampur of South Dinajpur, got married. In that respect, they are known with good faith.

Uttam Biswas came to Saiful Islam’s house after coming to Bangladesh. Saiful was sleeping with a guest in a room adjacent to the chicken farm next to the house on Friday night. It is better to die there. Upon receiving the news, the police went around at noon and recovered the body. He was later sent to Rajshahi Medical College (RAMEC) morgue for autopsy.

He added that it was initially thought that the Indian national had died of a heart attack. The exact cause of death will be known after receiving the autopsy report. The SI also said that the police is taking legal action in this regard. 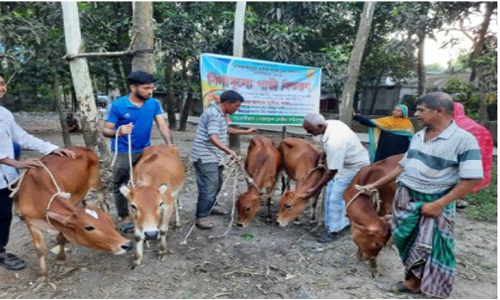 Cows have been distributed free of cost in Sherpur