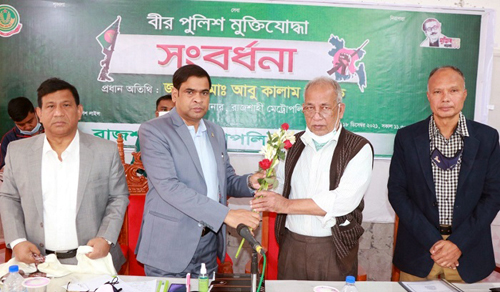 On the occasion of the Great Victory Day, the Rajshahi Metropolitan Police has given a reception to the heroic police freedom fighters of Rajshahi region who took part in the liberation war on the initiative of RMP.

Metropolitan Police Commissioner Md Abu Kalam Siddique was present as the chief guest on the occasion. At the beginning of his speech, the Commissioner of Police paid homage to Father of the Nation Bangabandhu Sheikh Mujibur Rahman and Shaheed Bir Police freedom fighters and said that freedom fighters are the best children of the nation. We are very proud to honor them. We got an independent country because they fought at the risk of their lives. 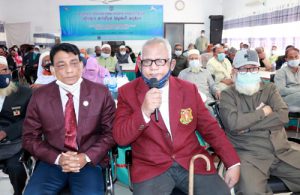 He further said that Rajshahi Police Lines has a glorious history in the great war of liberation. Responding to the call of Father of the Nation Bangabandhu Sheikh Mujibur Rahman, the police members of Rajshahi jumped into the war of liberation.

For three days from March 25, 1971 to March 26, 1971, the Rajshahi Police Lines were able to resist the Pakistani aggressors armed with modern weapons. In that battle, 18 policemen were killed by the Pak aggressors. In addition, at the highest level of the police, the two senior officers were captured by the Pak aggressors. They too were martyred. The martyrdom of senior officers of the Liberation War Police took place in Rajshahi itself.