To prevent violence in upcoming UP elections UNO working in Bogura 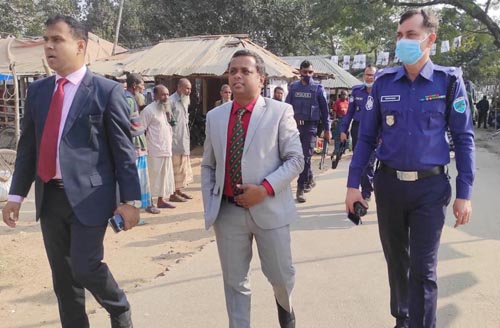 4th phase Election will be held on 26th December in 8 out of 9 Union Parishads of Kahalu Upazila of Bogura. Executive Magistrate and Kahalu Upazila Executive Officer Md Mashudur Rahman has come out in the field.

Executive Magistrate Ripon Sarkar was present at the time. Officer in charge (OC) Amber Hossain, SI Khair Uddin and other members of the police station were present.

Independent candidate Abdul Jalil’s (horse) brand office wavandalized and set on fire in Kahalu Muril Union on December 16 at 3.00 pm. A total of 04 offices were set on fire in Katnahar village in Muril Union, in front of Kamal Doctor’s house next to Muril Bara Mosque and in Porapara.

He alleged that the workers of the boat candidate chairman Harej Uddin set fire to the election camp of the independent candidate during the Honda show-down. When the people were asked about the fire connection incident, they blamed the boat candidate.

On the other hand, when talking to the boat marker candidate Harej Uddin, he said that it is completely untrue and baseless. This kind of work cannot be done by me and my people. These are the manipulations of individual candidates. Seeing the popularity of my boat marker, I think they have chosen this kind of conspiracy route.

Talking to Mashudur Rahman, he said that if anyone tried to create violence in the Union Parishad elections and tried to disrupt the law and order situation, he would not be released. The campaign will continue from today till the Election Day. He appealed to all to refrain from violence in the forthcoming Union Parishad elections and to maintain law and order situation.