20,000 people of Rajshahi took oath with the Prime Minister 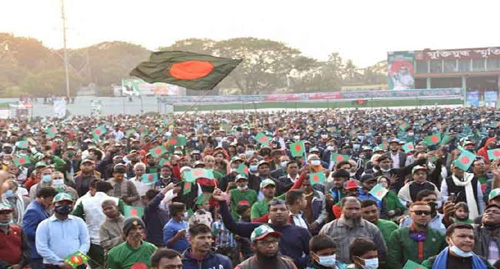 On the 50th anniversary of the victory, Prime Minister Sheikh Hasina has administered oath to the people of the country to remain steadfast in the spirit of liberation war. About 20,000 people of Rajshahi took part in the oath taken through video conference. They were sworn in at the District Liberation War Memorial Stadium on Thursday afternoon.

Leaders of Awami League and allied organizations, officials and employees of all government departments and common people took part in the program. The district administration said about 20,000 people took the oath. They took an oath to build a non-communal Bangladesh in the spirit of Bangabandhu, to use all their strength for the welfare of the people of the country and to love the country.