Celebrating the golden jubilee of victory with colorful arrangements in Rajshahi 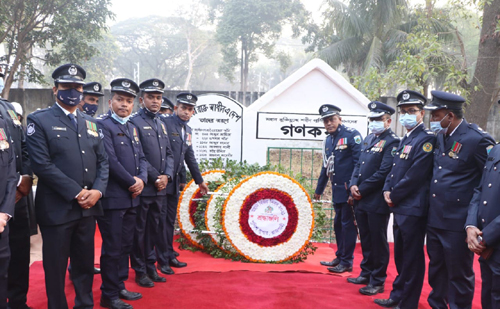 Bangladesh on the eve of the golden jubilee of victory. So this year the great Victory Day is being celebrated in a very different atmosphere in the divisional city Rajshahi.

The people of Rajshahi are remembering the sun children of the nation with due dignity. The 50th anniversary of the victory is being celebrated in Rajshahi with great enthusiasm. In the early hours of the Great Victory Day, 50 artillery shells were fired at the Rajshahi Police Lines.

Just as the people of Rajshahi rejoiced in the victory in the colorful day-long event, they are also remembering the martyrs of the great liberation war of 1971 with humble respect. 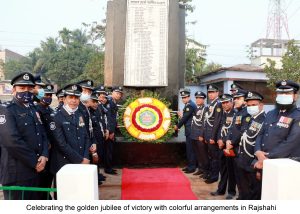 A discussion meeting and reception of the freedom fighters was held at Rajshahi Shilpakala Academy at 11 am on the theme ‘Building the Golden Bengal of the Father of the Nation’s Dream’. A women’s sports competition was held at Riverview Collectorate School ground at 11:30 am.

The swearing in ceremony was held by the Prime Minister through a video conference on the occasion of Mujibvarsha and the golden jubilee of independence at the Muktijuddha Smriti Stadium at 4 pm. A friendly football match between Rajshahi City Corporation vs District Sports Association and Vijay Concert was held at the same place at 4.30 pm and 5 pm respectively.

On this day a cultural performance including drawing, composition and recitation competition for children is being held at Rajshahi Shishu Academy. All the educational institutions have organized various programs on liberation war including live and online essay competition.

Special prayers and supplications have been offered in all mosques and temples, churches, pagodas and other places of worship except Johar for the forgiveness of the departed souls of the martyred freedom fighters, health of the war wounded freedom fighters and peace, prosperity and progress of the country and nation.

Meanwhile, various government and non-government organizations in Rajshahi have been illuminated on the occasion of the Great Victory Day. Documentaries on the liberation war are being displayed at various corners.

On Victory Day, the city’s main thoroughfares, road islands and various installations have been decorated with various flags, including the national flag. On this day, the park and museum are open for children to visit without tickets.