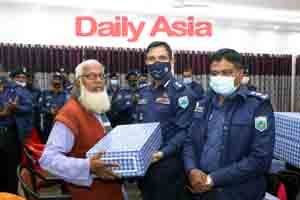 On the occasion of Great Victory Day 2021 organized by Rajshahi District Police, a reception and discussion meeting was held for the retired heroic freedom fighters of Bangladesh Police Force.

The event was held at Rajshahi Police Lines at 11am on Wednesday.

On the occasion, Rajshahi District Police greeted the freedom fighters and gave them gifts.