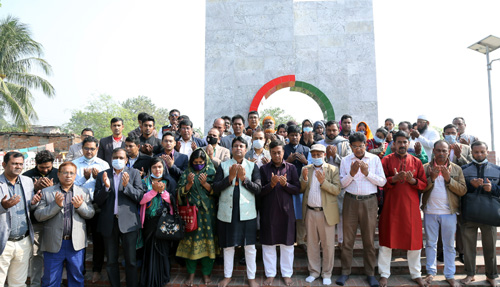 The mass reception was held on Saturday (December 11) at 3 pm at Saheb Bazar, Batar Mor in the city. AHM Khairuzzaman Liton, Mayor of Rajshahi City Corporation, son of AHM Kamaruzzaman, one of the martyrs of four national leaders, was soaked in the greetings and love of thousands of party leaders and workers and people of all walks of life.

The Rajshahi Metropolitan Awami League felicitated AHM Khairuzzaman Liton on the occasion by giving him honorary memento, flower greetings and certificate and also wearing northern attire. After that, people of all walks of life, including thousands of party leaders and activists, greeted Mayor Liton with flowers.

Awami League presidium member and Rasik Mayor AHM Khairuzzaman Liton in his speech expressed his gratitude and appreciation to the President of Bangladesh Awami League and Hon’ble Prime Minister Sheikh Hasina. “Everyone will pray for me to fulfill my responsibilities properly,” he said. I will do my best to work for the team and for the people. My hard work, talent, if the work is of any use to the team, it will be the greatest achievement of my life.

Earlier, group and national anthems were played at the beginning of the program. After that a minute of silence was observed in memory of all the martyrs of the great liberation war including Father of the Nation Bangabandhu Sheikh Mujibur Rahman and his family members, four national leaders.

AHM Khairuzzaman Liton was taken to the stage with music. Poet Bir Muktijoddha Professor Ruhul Amin Pramanik, a member of Rajshahi Metropolitan Awami League’s advisory committee, read out the certificate on the occasion.