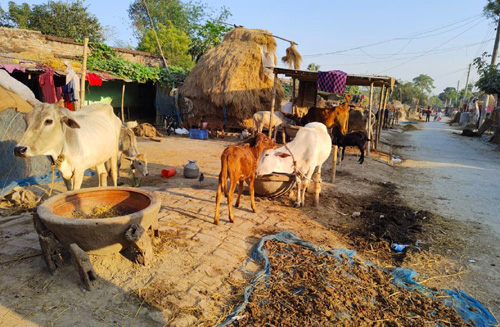 Registration of cows and buffaloes have to be done at the time of purchase or sale or birth in the border area. However, this process is not like human birth registration. This registration has to be done by the Chairman of Border Guard Bangladesh (BGB) and Union Parishad. You even have to keep a register book related to registration.

According to BGB sources, the rule of registration in this register is a very old one. In order to prevent illegal smuggling of cattle and buffaloes in the border areas, registration has to be done in the register. Which is mandatory. This allows for a thorough accounting of cows and buffaloes within a border area or union. The BGB authorities also claimed that the Indian smuggling was possible only because of this measure.

Assistant Camp Commander of Saheb Nagar BOP Camp  Naib Subedar Abbas Uddin said there is a lot of smuggling of cattle and buffaloes in the border areas. For this reason, the number of entire unions is kept in the register book to keep the cows and buffaloes as correct. One is in our camp, another is in the union council and another is in the possession of the animal owner. This account is kept when someone buys or sells cows and buffaloes. Even if a new cow is born in someone’s house, it has to be added in the register book of BGB Camp and Union Parishad.

He said that if anyone buys cows and buffaloes from outside, they should also be included in the BGB and Union Parishad. If anyone wants to sell his cow, he has to inform that too. In this case a clearance was given by the Union Parishad. In fact, we took it to us and in the context of that clearance, we omitted the number of cows and buffaloes. The same thing applies with buying.

A total of seven cows in the family, including one of his own. When asked, he said, “If you want to raise cows here, you have to register with the BGB.” It does not cost any money to register. Failure to register is considered illegal. So when a calf is born, we register it as birth. ‘

Housewife Hamida Begum lives in the same area.  She will have a calf in a few days. That too should be included in the list of BGB camps. It should be taken in the register of union services. The same in his own account.

Housewife Hamida said, ‘I have only one cow in my house now. If there is a child after two days, the child has to be taken to the camp within 10 days and registered. There they will write a description of what the cow looks like. No more problems after writing. But if you want to sell the cows, you have to go to the camp with the cows one day before and get the clearance. ‘

Asked why cows and buffaloes have to be registered, he said the Indian border is next door. Earlier, foreigners and local people used to bring cows from the border and keep them tied with local cows. It could not be understood which was native and which was Indian. But now after importing cows from India, they are caught even if they are stopped. So the system taken in this book has been introduced.

Regarding the student letter, he said, even if the purchase and sale clearance is given by the union council, it has to be taken in the register book of BGB. The clearance issued is signed by the chairman, a member and the BGB camp commander. Then someone can buy and sell that animal. In this case, the owner of the animal has to drag his cows and buffaloes to the camp.

Many people of this village run their family only by raising cows. Some people have 40-50 cows at a time. They cannot afford to eat so many cows at once. So they took the cows to the huge field of Altali Union in Godagari for feeding. They rode cows from morning to afternoon and brought them to their baths in the evening. They also need to be told where the cowshed or barn is. Although the system is good for accounting, it is quite a hassle for the common man. Chairman Sanaullah said that many people do not like it because they go here and there with cows and buffaloes.

BGB Commander Sabbir Ahmed said that no birth registration of cows and buffaloes is done, but a register book is maintained in the border BOP camps. In this case, it is a combination of local chairman, members and camp commanders. The BGB has an estimate of the number of cows in the char area. Otherwise, it is not possible to stop cattle smuggling at the border. Anyone who brings cows from the other side will say that those cows are his.

He said Indian cattle usually enter Bangladesh illegally from the border areas. This system has prevented smuggling of cows and buffaloes. We are even able to keep accurate accounts of animals in a particular area. This initiative has been taken mainly to prevent smuggling.