Application for recalculation by examining EVM machine with expert 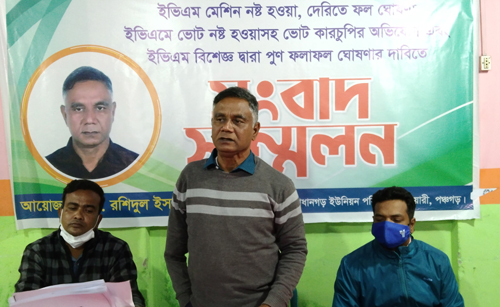 Awami League’s defeated chairman candidate Md Rashidul Islam. The losing candidate has also filed a case in the Election Tribunal with a written application along with the Returning Officer demanding recount of votes by experts.

At a press conference at Panchagarh Community Center on Monday afternoon, he demanded that the results be re-announced after examining the EVM machine with experts.

He said at the press conference that he did not seek nomination from Awami League as general secretary of Radhangarh Union Awami League and did not participate in the election for the post of chairman as an independent candidate.

He has made various allegations including giving the results of the center in handwritten form, not taking the names and signatures of the polling agents in the result seat. He further said that the election tribunal has filed a case against the elected chairman Abu Jahed, deputy commissioner, district election officer and 5 others. The hearing of the case will be held on December 15.
AKM Anwarul Islam Khair, counsel for the plaintiffs in the case, said that a case was filed in the election tribunal court on December 12. The case has been filed under Section 53 (1) of the Local Government (Union Parishad) Election Rules, 2010 in favor of Section 22 of the Local Government (Union Parishad) / Act 2009. The case alleges that hacking took place on the day of polling in Radhangarh Union.

EVM machines were broken in each center from 12 noon to 3 pm. Voting was closed at that time. In addition, the results were announced later than the results of the Union Council held on ballot papers, many voters were unable to cast their votes, polling agents were expelled, votes were reported to be lost on EVMs, results were given in handwritten forms without EVMs. Various allegations have been made including not taking his signature.

Atwari Upazila Election Officer and Returning Officer Shahidul Alam said there was no chance of the EVM machine being hacked. Three EVMs appeared in some centers at noon on polling day. A two-member team from Dhaka worked on the EVM machine at the time.

Voting was delayed for about an hour. Later those machines were changed. We still have the results of each polling station signed by the polling agent. Asked why a copy of the results from the EVM machine was not given to the chairman candidate that day, he said, “In fact, the results are preserved. Chairman candidate Rashidul Islam did not ask us for that result.”
It may be mentioned that in the third phase of the election held on 26 November, Abu Jahed, the Awami League nominated chairman candidate for the post of chairman of Atwari’s Radhangarh Union Parishad, was elected unofficially with 6308 votes. Awami League rebel candidate Radhanagar Union Awami League general secretary. Rashidul Islam got 6103 votes per pineapple.