Two people hanged for killing a farmer in Rajshahi 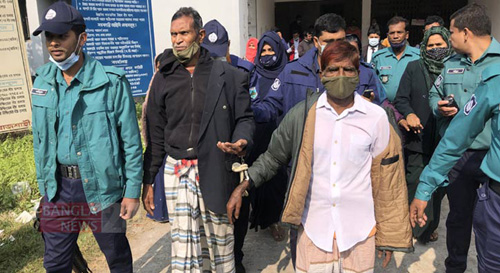 A court has ordered the death of two people in connection with the murder of a farmer named Noor Nabi in Durgapur of Rajshahi. At the same time, the victims have been fined Tk 50,000.

The verdict was handed down by Judge Akbar Ali Sheikh of the Crimes Suppression Tribunal and Special Sessions Judge’s Court-2 Rajshahi on Monday afternoon.

The accused are: Mofiz Uddin (45) and Fuljan Bibi (40). Another accused in the case, Fuljan Bibi’s husband Deraj Mistry, was acquitted by the court as he was not involved in the incident.

The court heard the testimony of 29 witnesses in the case.

Asaduzzaman Mithu, state counsel for the tribunal, said, “Mofiz Uddin was in love with Fuljan, the wife of Deraj Mistry. One day Mofiz Uddin saw Nur Nabi in that house. At one stage of the argument, Mofiz threatened to kill Nurnabi.

Fuljan called Bibi Nurunnabi at home. Mofiz Uddin was already present in the house. After that there was a scuffle between Nurunnabi and Mofiz. At one point, Fuljan handed over a sharp razor to Mofiz and told him to kill. At that time, when Mofiz hit Nurunnabi in the neck, his head became detached. Then they dumped Nurunnabi’s body in a sack on a piece of land.

However, the road by which the dead Nurunnabi was taken was covered in blood. Seeing the blood, the locals surrounded Fuljan Bibi’s house. Police later arrested Fuljan Bibi, her husband Deraj Mistry, sons Abdur Rahim and Mofiz Uddin. Later, when the case went to CID, his son Abdur Rahim was released as he was not involved. Later, Fuljan Bibi and Mofiz Uddin pleaded guilty in the court.

One day later in the morning, the police recovered the headless body of Durgapur from the Vita of Jehe Mall in Kander of Durgapur. Hashem Ali, son of Durgapur, became the plaintiff and filed a case with Durgapur police station mentioning the names of four persons.