Bangladesh into a developed and prosperous country-Sheikh Hasina 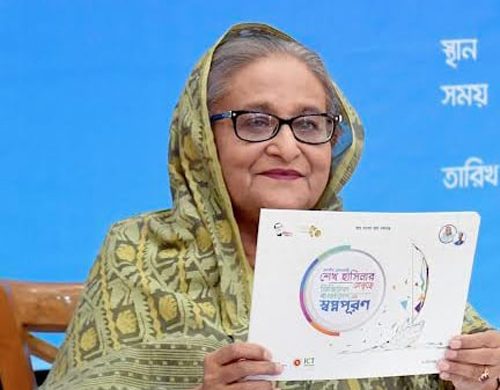 Prime Minister Sheikh Hasina today said the “Soldiers of 2041” enriched with knowledge of science and technology are ready to turn Bangladesh into a developed and prosperous country. She said her government has been working with a target to surpass all  sectors including readymade garment in earning foreign currency by exporting digital devices.

“Now, we have no tension as we have progressed much toward building a science-technology-knowledge based society. Bangladesh must be a developed and prosperous country by 2041, as its soldiers are ready to get this biggest
achievement,” she said.

The prime minister came up with the observation coinciding robot invention by school students for agriculture sector and some other inventions by the young people thanks to Digital Bangladesh.

The premier said the little boys and girls invented many things by their innovative ideas and the people are getting services from their innovations. She credited her Information and Communication Technology Affairs Adviser
Sajeeb Wazed for building the “Digital Bangladesh” as the idea was his brainchild.

The prime minister said the more the young generation will be familiar and trained with the latest and modern technology, the more they will be efficient to take Bangladesh ahead toward prosperity.

“We have to go ahead in the future. So, the new generation needs to take  preparation to build the future,” she said.  The prime minister earlier unveiled the cover of a book “Manoniyo  Prodhanmontri Sheikh Hasinar Netritte Digital Bangladesher Swapnopuron”. State Minister for Information and Communication Technology (ICT) Zunaid
Ahmed Palak, MP, and its Senior Secretary N M Zeaul Alam, spoke on the  occasion.

On behalf of the prime minister, the state minister distributed crests,  cheques and certificates among 24 Digital Bangladesh Award winners in three categories — best person, organisation and team — in government and private
levels.

PM’s Principal Secretary Dr Ahmad Kaikaus received the award on behalf of the best team in technical field for developing and introducing the Covid-19 Surokhya App. Separate audio-video documentaries were screened on how to transform  Bangladesh into a digital country on the occasion.

Sheikh Hasina expressed the hope that the export of digital devices would surpass all the sectors including the readymade garments as her government has fixed a target to earn 5 billon US dollar from exporting the digital devices by 2025.

“We are now exporting readymade garments and thinking that it is the largest export earning sector. We have fixed a specific target regarding production and export of digital devices. Our children will get scope to show their talents in this sector,” she said.

The Premier added “My opinion is that the export earning from digital devices will exceed all the sectors.”

She said Father of the Nation Bangabandhu Sheikh Mujibur Rahman had first taken the initiative of making a science- technology-and-knowledge based society to take Bangladesh ahead to prosperity with forming Kudrat-e-Khuda Education Commission to formulate a education policy.

The Prime Minister said that Bangabandhu had established the Betbunia Satellite Earth Station and following his footprints, her government has launched Bangabandhu Satellite -1.

Sheikh Hasina coming down heavily on the BNP government, as the then Prime Minister Khaleda Zia declined to get submarine cable free of cost on the plea of stealing out all the local information.

The Premier said that her government had reduced the internet bandwith cost to only Taka 400 from Tk 78,000 to make internet and all the services through internet available at the grassroots.