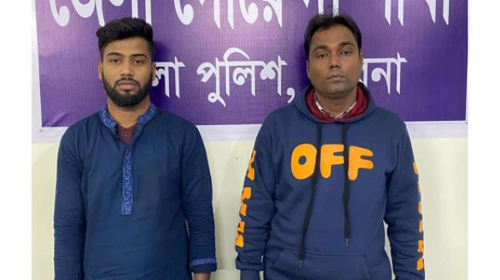 A murder case has been filed in connection with the murder of independent chairman candidate Yasin Alam Khan in Bharara Union of Pabna Sadar Upazila.

Abu Saeed Khan, Pabna Sadar upazila Awami League’s organising secretary, chairman candidate of boat symbol is named as the main accused in the case along with 34 others naming and unidentified 50 others.

Aminul Islam, officer-in-charge of Pabna police station confirmed the matter and said that the police have started investigation into the incident since the case was filed.

The OC further said that after the incident on Saturday noon, police arrested two persons with revolvers and ammunition from Naldah area of the union on Saturday noon. They are also the accused in this case. Earlier on Saturday, the duo were also charged under the Arms Act. They were sent to jail through the court on Saturday evening.

Meanwhile, the Election Commission has announced the postponement of the election for the post of chairman of the Bharara Union in the wake of the death of an independent candidate.

It may be mentioned that the election of 10 Union Parishads of Pabna Sadar Upazila will be held on December 28.

Many people have reportedly fled the area to avoid arrest after the case.