242 sacks of stolen rice from Naogaon godown, recovered from Pabna 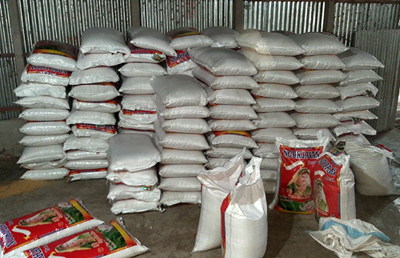 Police on Saturday recovered 242 sacks of rice from Pabna and arrested two businessmen which stolen from Naogaon.

According to Chatmohar thana police in Pabna said that Mahadevpur police in Naogaon district, in collaboration with Pabna’s Chatmohar police, recovered the rice on Saturday morning and arrested two people.

The arrested are Rafiqul Islam, 40, son of Jonab Ali of Bahadurpur Paschimpara village of Chatmohar upazila and Shahjahan Pramanik, 45, son of late Chaimuddin of Kumesh village in Atgharia upazila in Pabna.

During the drive, Mahadevpur police station Inspector (Investigation) Abul Kalam Azad said that a truck carrying 280 sacks of rice from Bhai Bhai Rice Agency in Mahadevpur left for Feni on December 1.  But the rice loaded truck did not go to the destination and sold it at Chatmohar.

Abu Nasim Mashiur Rahman, a rice owner from Mahadevpur, found out that the truck driver had sold his rice at Atgharia in Pabna and the driver fled.

He filed a case at Mahadevpur police station on December 2.

According to the investigation of the case, Mahadevpur police with the help of Chatmohar police conducted raids in Chatmohar and Atgharia on Saturday morning.  At that time, 242 sacks of rice were seized from the godowns of Shahjahan Ali and Rafiqul Islam of Chatmohar and Atgharia upazial in Pabna. Two rice traders were arrested. The remaining 38 sacks of rice were not found. After the duo arrestees were taken to Mahadevpur police station at afternoon. Police said they were conducting an operation to arrest the fugitive truck driver.