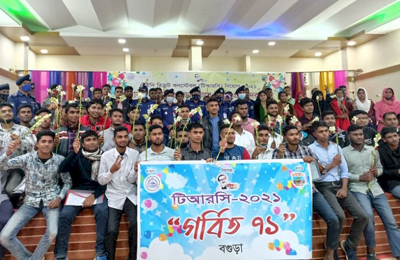 A total 71 youth got police constables jobs paying only Tk 100 in Bogura. The newly recruited youths were congratulated and flowers were given on behalf of district police.

According to the district police, the recruitment of police constables has been completed this time only on the basis of merit and necessary qualifications while maintaining intelligence surveillance with sincerity and devotion to maintain the image of Bangladesh Police, the first resistance force in the war of liberation.

The recruitment of constables has been properly scrutinized by keeping secret activities so that there is no financial transaction or any other irregularity in the recruitment process. A few months before the appointment of the police constable, campaigns, distribution of leaflets and banners were hung at various places in the district through social media. A massive campaign was launched to complete the recruitment of police constables by avoiding all irregularities and recommendations including financial transactions.

It is learned that most of the 71 constables have come from extremely poor families. Of these, 60 male members and 11 female members have been appointed.

It may be mentioned that a total 2080 job-seeking youths from 12 upazilas of the district stood in line as part of the recruitment process of police constables. Later, 244 physically fit candidates were selected for the oral examination.

Superintendent of Police Sudip Kumar Chakraborty BPM (seba) said according to the orders of honorable IGP, they have performed recruitment work of the police constable only on the basis of merit and necessary qualifications.