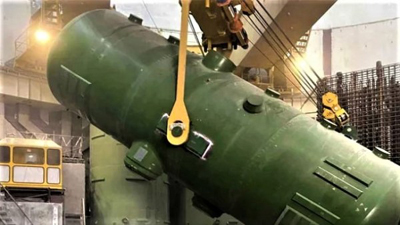 All four steam generators have been installed at the design position at Unit-1 of the Rooppur Nuclear Power Project.

The concerned department informed the media on Thursday night, Specialists of Energospecmontazh, a subcontracting organisation of ROSATOM State Corporation Engineering Division have carried out assembly operations to install the steam generators at their regular position in the reactor compartment in accordance with the approved schedule.

“Another important stage of the installation works has been completed at Power Unit- 1. The steam generators being installed in the permanent position allows starting welding works on the main circulation pipeline to connect the primary circuit equipment, such as a reactor, steam generators, main circulation pumps”, said Aleksey Deriy, Vice-President of ASE and Director of the Rooppur NPP Construction Project.

The steam generators were manufactured for the Rooppur NPP at the Atommash plant (branch of AEM-Technologies) in Volgodonsk of Russia. Each complete steam generator is about 14-meter-long, more than 4 meters in width and weighs 350 tons.

The steam generators are the main equipment of the reactor plant circulation circuit and are designed to transfer the heat produced in the reactor core to the secondary circuit, where the steam to rotate the turbine to generate electricity.

The Rooppur NPP is designed and constructed by ROSATOM State Corporation Engineering Division as the General Contractor. The plant will consist of two Generation III+ VVER-1200 reactor power units with an expected life cycle of 60 years and a provision extension for another 20 years.