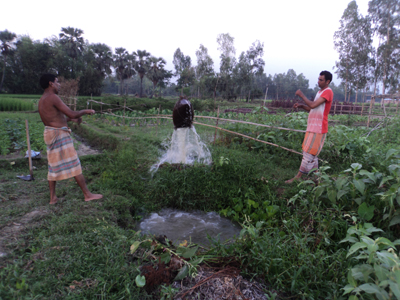 Farmers are passing busy time to cultivate pepper in char which have been submerged in flood waters for a long time on the banks of river Jamuna in Bogura.

Meanwhile, the farmers have started re-arranging various types of vegetables in the Jamuna chars including pepper. This time hybrid pepper has been cultivated most in Char. Due to good yield and fair market price, the farmers are showing to grow this variety of pepper.

Aalim Uddin of Jorgachha village in Bhelabari union of Sariakandi upazila said that on the advice of Sub- Assistant Agriculture Officer Shafiul Alam, he has cultivated hybrid pepper in a total of 0.42 acres of land.

Jabed Ali, a pepper farmer from Dhunot Upazila, said he has cultivated hybrid pepper on 1 bighas of land this year. So far he has sold 8 tons of pepper. He has sold it for Tk 60 per kg. He hopes to be able to pick peppers from the land by next January-February.

According to the Sariakandi Upazila Agriculture Office, the lands have become suitable for cultivation due to siltation in the char lands. Although pepper is cultivated in all areas of the upazila, it is relatively abundant in the char areas.

Upazila Agriculture Officer of Sariakandi Abdul Halim said that due to good yield and price of hybrid chillies in the last few years, farmers have become interested in cultivating this variety. Apart from chillies, local farmers have also cultivated various vegetables including gainja paddy, radish, onion, spinach and lentils, he added.