Farmer optimistic to be self-reliant by cultivating garlic in Bogura 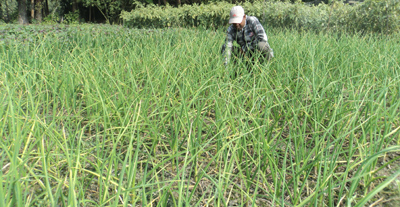 The garlic variety accompanied by Bangladesh Agriculture Development Corporation cultivation is gaining momentum in Bogura district as the farmers get bumper output and fair market price with the farming.

With fresh farming of BARI-1 garlic previous year, the farmers had made three times profit, said farmer Kamrul Hasan  under Sonatola upazila. He has planted BARI-1 garlic variety at his 32 decimal of land spending Tk 9300 this year, he added.

“BARI-1garlic cultivation had brought revolutionary success amid farmers as they made good profit last year,” said Dupchanchia upazila agriculture officer SajedurAlom. He again said, “It is high time to plough the land in a view to grow garlic is last week of October.”

DAE has set a target to grow garlic on 1457 hectares of land this current season whereas the farmers have already brought some 1700 hectares of land. The farming may exceed its production target. River basin is most suitable for garlic growing as the soil of the basin remains more fertile. The soil and the atmosphere of agri-zone posse huge fertility and suitability for the spice cultivation.

The farmers have shown more interest to grow the spice in a vast tract as itscultivation is proved them as lucrative and easy.To make the farming a grand success, a monitoring cell implemented DAEis working round the clock.

Deputy Director of DAE Md Dulal Hossain said the farmers are getting smooth assistance from the agriculture offices in all twelve upazilas of the district. A bumper output of garlic is likely this current season as favourable weather is prevailing in the region, DD added.