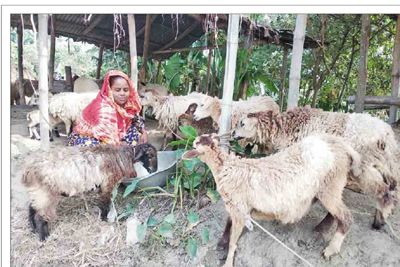 An effort is being materialized for producing improved variety of sheep in char land of the district to help the sheep farmers be self-reliant economically.

Friendship, a leading non-government organization of the country is implementing the activity under Assistant for Sustainable Development (ASD)project or Transition Fund with the financial support of Friendship Luxembourg.

Project in charge Dibakar Biswas disclosed the abovementioned statements to the journalists in a function on Field Visit with the reporters of print and electronic media including news agency of the country at Kabilpur Char under Urya union of Fulchhariupazila in the district recently.

Project in charge Dibakar Biswas said Sadar, Sundarganj and Fulchhariupazila of the district had been brought under the project and as many as 240 distressed families of the upazilas were targeted as the project beneficiaries.

Under the project, female sheep of improved variety were distributed to the disadvantaged char families of the project command areas free of cost aimed at changing their socio-economic condition through involving themselves in income generating activity(IGA).

Not only sheep, but also twelve kinds of quality seed of vegetables were also distributed to the beneficiaries to help them earn economic profit through engaging them in IGA, he also said.

As part of the project work, the female sheep that have the fertility power are being given artificial insemination in a bid to produce and increase the sheep population of improved variety with the technical support of BAU, he added.

After ending the briefing, the team of the journalists visited the houses of the beneficiaries and exchanged views with them about the project related activities.

After talking to the beneficiaries it was learnt that they are so much interested in sheep farming as the environment of the char land is very suitable for sheep farming.

The sheep of the chars are also the disaster resilient more than the goat and the sheep are not normally affected with the diseases like the goat. In a word, there is a little diseases of the sheep that have the high resistant power against the diseases, they also said.

No extra cost is not done for sheep feeding. They feed on grass of char land, they added.

Momena Begum, a beneficiary of Urya union of Fulchhariupazila said she took a female sheep worth of TK 4500 from the organization a few years back.

After rearing the sheep, she got more sheep. At present, the number of sheep rose to 6 which price is estimated at TK 60,000, she added.

All the beneficiary had also expressed their gratefulness to the Friendship for standing beside them with sheep and vegetable seed aimed at changing their lots economically.