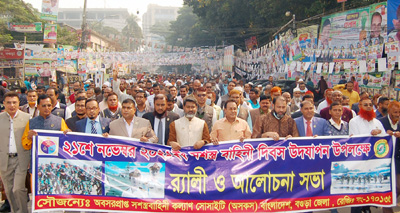 On the occasion of Armed Forces Day, a colorful rally was taken out from Shaheed Khokon Park in the city on Sunday at the initiative of Bogra District Branch of Retired Armed Forces Welfare Society. After concluding the rally at Shaheed Khokon Park, a discussion meeting was held under the chairmanship of the president of the society Farooq Ahmed.