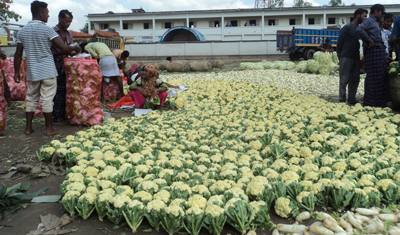 They along with family members are passing busy time to harvest early winter cauliflowers from last week. They are optimistic to make good profit if the market price remains high till next month. They are expecting to become self-reliant growing the vegetable.

Farmer Shahadat Hossain under Shibganj upazila said, “Due to vast profit, the early winter cauliflower farming is increasing in the region.”  “The farming will create job opportunity among the marginal day labourers across the area.” He added.

Farmer Hossain Ali, 40, under sadar upazila said he has cultivated cauliflower on 55 decimal of land spending Tk 62,000 and hopes to sell at Tk 0.2 million this season. Meanwhile he had made over Tk 50000.

If the farmers have been provided all sort of necessary agri-input, the farmers will grow average 36 to 30 metric tonnes of yield from each hectare. The farmers show more interest to bring the crop land under cauliflower cultivation as they had made a good profit previous year.

Deputy Diretor of DAE Md Dulal said the extreme poor peasants of the district mostly depend on agriculture based rabi and Khorip crops round the year. They provide all sort of logistic support among the eager farmers, he added.