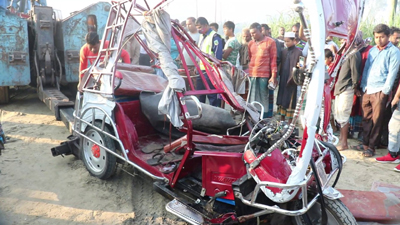 At least five persons were killed and three other injured in a road accident at Balkchar area of Bogura-Rangpur Highway under Gobindaganjupazila in the district this morning around 7 AM.

Locals sources said the accident took place when a passenger bus of HanifParibahan(Ba 15-2599) coming from Dhaka ran over a easybikelocally known as auto rickshaw coming from opposite direction at the area leaving three passengers of the easy bike dead and five other injured.

Being informed, the men of Fire service and Civil Defense Station, Gobindaganj rushed to the spot and rescued them in cooperation with the locals and sent them to GobindaganjUpazila Health Complex but two of them also killed on way to the hospital,

The driver and the helper of the bus managed to flee the scene after the incident, he added.