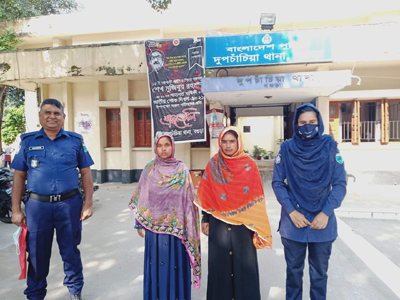 Two female cutpurses have nabbed over pick pocketing from Shazapur area under Dupchanchia upazila in Bogura at around 9 PM on Sunday.

After lodging a theft case in the name of unknown persons at Dupchanchia police station the police personnel led by Sub-inspector Niaman Nasir and under the direction of Officer-in-charge Md Hasan Ali, start their operation. They seek CC TV footage and see three women are walking along the CO office road below the bank, three women at one stage exchanged greetings with them and stole the money kept in their vanity bags.

CC TV looked at the camera footage and identified the female thieves in collaboration with the victims. At around 9 pm, the organized thieves were on their way to Dupchanchia with the addition of CNG when the police arrested them at the Bazardighi area of ​​the upazila blocking the CNG route.

Officer-in-Charge Hasan Ali confirmed the matter and said that they were members of an organized women’s gang. At different times, they followed the money launderers in front of the banks and financial institutions of different upazilas and manipulated the money.

Note that Officer-in-charge Md Hasan Ali recently brought important areas of the upazila under CCTV cameras to trace the criminal and bring them under punishment. The success of this CCTV camera in arresting organized female thieves.