Friendship’s ASD project being implemented for char people in Kurigram 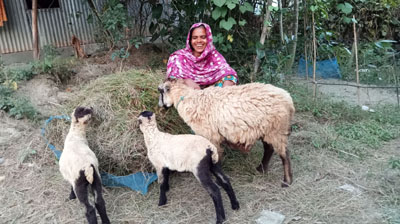 A welfare project entitledAssistance for Sustainable Development (ASD) or Transition Fund under Climate Action Sector is being implemented for 721 char dwellers of Sadar, Chilmari and Rowmariupazilas under Kurigram district since 2017.

With the financial assistance of Friendship Luxembourg, Friendship, a leading non-government organization of the country is implementing the project designed for five years for the underprivileged and disadvantaged char peoples of the upazilas aimed at improving their living standard for making them self-dependent economically along with ensuring equal dignity through providing them with season wise good seed of various vegetables.

Apart from it, to ensure good government among the char dwellers and to eradicate social problems like child marriage, domestic violence side by side with building their capacity on facing natural disasters are also the objectives of the project, said project manager Ashraful Islam Mollick.

The beneficiaries started changing their socio-economic condition by sheep rearing and vegetable farming.

Rasheda Begum, a beneficiary woman of RowmaryUpazila said like other beneficiaries, she received a sheep worth of TK 3600 and seed of vegetable of Twelve varieties from the project. After rearing the sheep on the char land and farming vegetable on the homestead, the number of sheep increased and vegetable farming also extended on the homesteadsat larger sacale. Now, the price of for sheep has stood to TK 12,000. She also earned TK 12,000 through selling the vegetables in local markets after meeting the family demand. The earned money helped her bear the family expense without economic trouble during the hard and critical times.

With this income, Rasheda also purchased a goat worth of TK 4500 and built a bamboo bridge in her village for smooth movement on the rural road.

Earlier, the beneficiaries were imparted need base training successfully on sheep rearing and vegetable farming before engaging them in income generating activities at the initiative of the project, Mollick also said.

As the lots of the beneficiaries had been changed significally, they also expressed their gratefulness to the organization and its welfare project including the concerned officials and staff for standing beside them with sheep and vegetable seed aimed to changing their socio-economic condition.