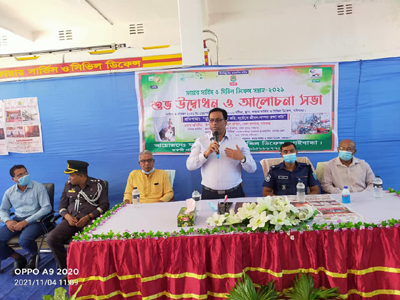 Fire Service and Civil Defense week-2021 has begun in the district yesterday as elsewhere in the country with a call to create mass awareness to prevent fire incidents and others calamities.

This year’s theme of the week is ‘MujibBorsheShapoth Kori, DurjogeyJibon-SampadRokkha Kori’.

To mark the week, Fire Service and Civil Defense office here has taken the elaborate programmes. On Thursday around 10 am, an inaugural function organized by FSCD office here was held on the office premises of the town here with deputy assistant director of FSCD here MdEnamulHaque in the chair.

District accounts officer Md. Shafiqul Islam addressed the function among others. The speakers in the speeches said the personnel of FSCD are playing significant role to ensure security of the people’s lives and properties during any manmade disasters of the country.

The activities of the FSCD are appreciable as the staff of the FSCD are extinguishing fire, rescuing the injured people and serving them, transporting patients in critical condition and facing natural disasters, they added.

Earlier, deputy assistant director of FSCD office Amirul Islam Sarker made a welcome speech and gave a scenario about his department and its activities here elaborately.

DC Abdul Matin in his speeches said as the government institution, at first, workers of FSCD stand beside the people putting their lives at risk during the period of manmade and natural disasters.

The efficiency and capacity of the FSCD has increased more than any previous time for taking pragmatic measures including supplying modern equipment by the present government led by Prime Minister Sheikh Hasina, the DC also said.

The government has set up FSCD stations at every upazila in the district so that the fire fighter men could respond quickly and extinguish the fire without delay going to the spots hurriedly, the DC added.

The DC also urged the staff of the FSCD office here to be more cordial and professional in performing their duties and build Sonar Bangla as dreamt by greatest Bengalees of all times Father of the Nation Bangabandhu Sheikh Mujibur Rahman by implementing the pledge of building Safe Bangladesh.

Later, the DC distributed certificates to the volunteers who received training on search and rescue, first aid and firefighting under Volunteer Development Training programme