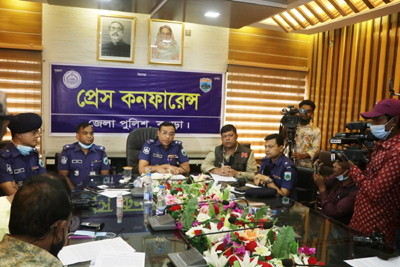 Superintendent of Police Sudip Kumar Chakraborty BPM seba spoke at a press briefing and said on November 2 at different times on the basis of perfect intelligence information led by DB the police arrested three accused who were directly involved in the murder of battery-powered auto rickshaw driver Mehedi. 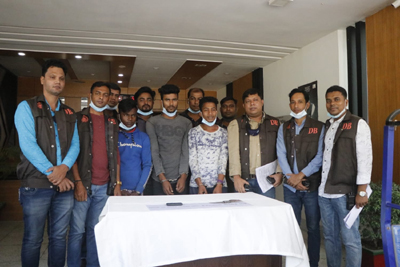 On October 31, fishermen at Prem Jamuna Char under Sariakandi Police Station found a dead body while fishing and they informed the Sariakandi Police on their mobile phones through a local people’s representative.

Sariakandi police immediately went to the spot and recovered the dead body and the knife used in the murder. Apart from preliminary inquiries, the arrested accused said that the deceased Mehedi Hasan (25) was making a living by driving a battery-powered auto in Bogura city. The accused had earlier planned to hijack the auto rickshaw.

Md Amirul Islam from Dighalkandi mouza on the west side of Jamuna river under Sariakandi police station by leaving an auto rickshaw at Sariakandi Prem Jamuna ghat. According to the previous plan, the accused stabbed Mehedi Hasan in the neck, face and other parts of the body with a sharp knife.

After the murder, they moved to Bogura with Mehedi Hasan’s used mobile phone and battery-powered auto rickshaw. Shakib Hasan tried to sell the auto rickshaw at different places in the city.

After further interrogation of the accused Shakib Hasan, a Smiles mobile set used by the deceased Mehedi Hasan was recovered and confiscated from under the pillow in the tin set room of the rented house at Naruli Madhyapara under Sadar Police Station.