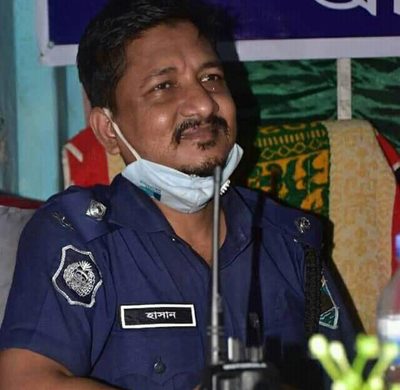 Officer-in-Charge (OC) Hasan Ali is trusted name to inhabitants of Dupchanchia Upazila in Bogura district as he is trying to ensure smooth citizen service round the clock.

After joining in the police station on October 20 last year he has taken the self-determined responsibility of inhabitants of Dupchanchia police station for the safety of the common people. He is zero tolerance to drugs and terrorism.

He is making unimaginable achievements in building a digital Bangladesh. In the meantime, his special success in setting up CCTV cameras in different areas of the upazila to curb crime and identify the culprits and bring them under the law is noticeable.

He is successful in gaining hundred percent of trust and confidence of the common people. The people are the police, the police are the people. The helpless people of the area have expressed their opinion that he has been able to make this slogan a reality.

Since joining, he has been in constant consultation with political figures, civil society, well-wishers and journalists, working with the people of Dupchachia to improve law and order as well as expand policing activities to bring police services to people’s doorsteps. He also brought changes in the activities of the police.

His role in recovering stolen and lost mobile phones using digital technology is commendable. To curb crime, he has arranged for night patrols along with police and volunteer teams to patrol on motorcycles.

Just another challenge of the OC is gambling. The accused involved in the murder, including the revelation of the mystery of a clumsy murder in Dupchanchia last month, was arrested within 24 hours and brought under the law.

In addition to the work of police administration, he has also done social and humanitarian work. He has provided financial assistance to poor, virgin and incurable patients. Recently, under the leadership of Superintendent of Police Sudip Kumar Chakraborty BPM Seba and under the guidance of Senior Assistant Superintendent of Police (Adamdighi Circle) Najran Rauf, he has played a leading role in the smooth and peaceful observance of Durga Puja, a religious festival of the Hindu community in Dupchanchia Upazila. He also formed a 100-member Hindu-Muslim Harmony Committee in each union.

OC Hasan said he sought the cooperation of the people of the upazila so that he could fulfill the expectations of the people by performing his duties faithfully in the coming days.