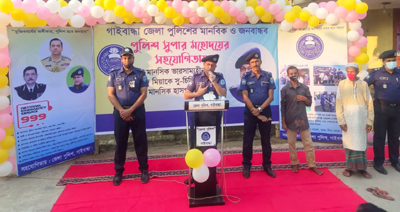 District police led by superintendent of police (SP) Muhammad Towhidul Islam stood beside a mentally upset man with positive attitude to help him recover from mental disease through proving him with Medicare facilities at Pabna Mental Hospital.

Family sources said, Towhid Miah, son of Rafiqul Islam of Jamalpur union under Sadullapurupazila in the district had been suffering from mental imbalance for five years last. He had been moving here and there without any reason. By this time, he went missing two times. After hectic searching by the close relatives and near and dear ones, he was found. His parents were not able to meet up the treatment cost due to poverty. Later the matter drew the attention of the officer in- charge(OC) of SadullapurthanaProdwip Kumar Roy.

Then the OC Shared the matter with SP Muhammad Towhidul Islam who suggested to conduct treatment for Towhid Miah aimed at early recovery from the mental disease. Not only that, the SP also recommended to send the victim to Mental Hospital, Pabna for his treatment purpose.

Accordingly, at the initiative of the district police, he was sent to Pabna Mental Hospital on Tuesday. A formal function was also held on the premises of Sadullapur Thana on Tuesday afternoon with OC Prodwip Kumar Roy in the chair.

SP Muhammad Towhidul Islam attended the function and addressed it as the chief guest. Speaking on the occasion, SP Towhidul Islam in his speeches said the district police took the initiative for the victim on humanitarian ground.

After instant reaction the guardians of the victim expressed their gratefulness to the district police and its chief SP Muhammad Towhidul Islam for doing the benevolent work for Towhihid Miah.