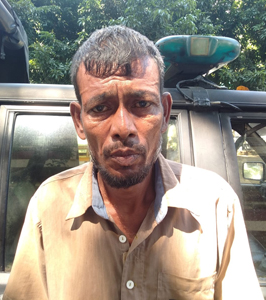 RAB-12, Bogura Camp on Saturday arrested a drug dealer while preparing to sell cannabis in Ashikpur village area on Bogura-Natore road under Shajahanpur police station on the basis of secret information.

Detained Md Sarwar Hossain (50), son of Abdul Kashemat  Ashiqpur (Pashi-Mapara) village of under the police station. Rab recovered 2 kg 850 gm of cannabis and a mobile phone from him.

Squadron Leader Md Sohrab Hossain said such anti-drug campaign activities of RAB will continue and will be intensified in future. We firmly believe that such activities of the law enforcement agencies can make Bangladesh a crime free country.