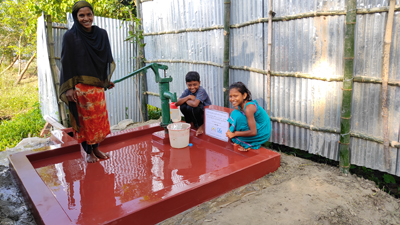 According to the Global One Bangladesh sources said that the Charsadirajpur, Komarpur, Charashutoshpur villages under Dogachhi unionof of Sadar upazila in Pabna district, Chargobindpur and Charchandpur villages under Shilaidaha union of Kumarkhali upazila in Kushtia district have been brought under this project in initial stage.

Hundreds of families in these villages are living by coping with natural disasters like drought, floods and river erosion. The scarcest of these chars is safe drinking water. People on the banks of the Padma are deprived of that water.

Global has installed only 11 shalo tube wells in the char villages of these two unions, which require more than 200 tube wells. Which is insignificant at once compared to the need. People have to rush from far and wide to collect water in these tubes which is very difficult. 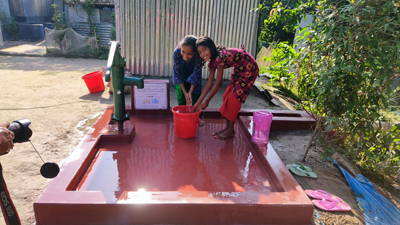 Bulbuli Khatun, Sumi Begum and Champa Khatun of Charsadirajpur village said, ‘No one listens to our plight. We suffer a lot due to lack of potable water. So we request that a large number of tubewells be installed so that we can get potable water. ‘

These riparian areas are flooded during the monsoon season and dry up in the summer. Due to lack of water, the ponds in these areas dry up. Water does not rise in the tube well. Again, tube wells are not in everyone’s house. So, the poor people have to collect tube well water from a distance and drink it along with household chores. The water crisis seems to be a daily occurrence for the people of this area.

According to the research, arsenic and salinity in the traditional river chars have also made the water unusable.

More than 56 percent of the people in Bangladesh do not have access to safe drinking water. The government is working to ensure that the number of 6 of the 17 UN Sustainable Development Goals is safe drinking water for 100% of the population by 2030.

To help the government achieve its SDG targets, London-based international organisation Global One Bangladesh is installing shalo tubewells to ensure safe drinking water for the needy poor in the char areas of Pabna and Kushtia districts.

In the meantime, Global One Bangladesh, in collaboration with MSKS, has installed several shalo tubewells in the densely populated areas of the char region, which is far less than required. Experts and locals claim that it is very important to ensure safe drinking water for human welfare in the area surrounded by Padma River.