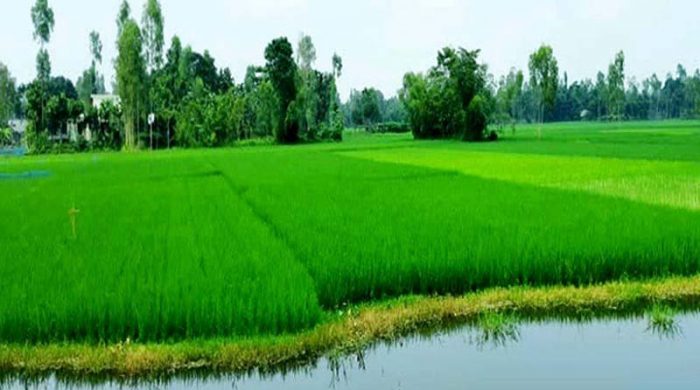 Officials of the Department of Agricultural Extension (DAE) and farmers are expecting bumper Aman rice production despite little damage caused by the recent flood to the crop in three districts out of five in the region.

The DAE officials said the recent rainfalls worked as energizers for excellent growth of Aman rice plants on croplands creating an eye-catching look all-around and making farmers happy in the region.

The DAE sources told BSS that a target of producing over 17.19 lakh tonnes of clean Aman rice (25.79 lakh tonnes of paddy) has been fixed from 6,12,451 hectares of land for the region this season.

However, the recent deluge damaged Transplanted Aman rice on 1,965 hectares of land in Lalmonirhat, Kurigram and Gaibandha districts of the region.

“After damage caused by the recent flood, Aman rice plants are growing superbly on the rest of 6,12,330 hectares of land, less by 121 hectares of land against the fixed farming target, amid excellent climatic conditions,” Ray said.

Against a requirement of preparing Aman rice seedbeds on 30,455 hectares of land to produce seedlings for transplantation on 6,12,451 hectares, farmers prepared the same on 34,066 hectares, higher by 3,611 hectares or 11.86 percent than required.

“Farmer completed re-transplantation of late varieties of Aman rice seedlings and broadcasting of seeds recently successfully recouping losses caused to the crop by recent flood in the region,” Ray added.

Meanwhile, the DAE and other agriculture related organisations and some NGOs are extending assistance to flood-hit farmers in taking preparation for cultivation of substitute crops on their flood-affected croplands.

“We have sent the statistics of flood-hit farmers to the government and are expecting to get allocations to assist them in recouping little crop losses they incurred due to the recent flood,” Ray added.

Talking to farmers Saiful Islam of village Satvita and Abu Bakker of village Noyagram in Ulipur upazila of Kurigram said floodwater submerged their Aman rice crops on 50 decimal and 66 decimals of land respectively this season.

However, they did not incur crop losses for cultivating flood-tolerant varieties of Aman rice on their croplands where their submerged Aman rice plants are growing again after recession of floodwater.