Ensuring education for all citizens underscored 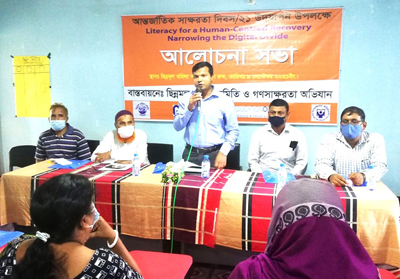 Speakers in a function here today underscored the need for ensuring education for all citizens of the country to build an enlightened and developed nation.

“As all kinds of development and progress of the country are fully dependent on education, an emphasis should be given to bring all children of both rural and urban areas of the country under cent percent education programme”, they said.

They made the comments while addressing a discussion meeting at the hall room of a reputed non-government voluntary organization SinnomulMohilaSamity (SMS) of the town here on Thursday noon with executive director of the SMS Murshidur Rahman Khan in the chair.

SMS and Campaign for Popular Education jointly organized the meeting as a part of the celebration of international Literacy Day-2021 which was celebrated in the district as elsewhere in the country on September 08 in a befitting manner.

This year’s theme of the day was “Literacy for human-centered recovery: Narrowing the digital divide”.

The speakers in their speeches emphasized for taking integrated efforts of all stakeholders of the society to push forward the education system towards desired goals.

ADM Robiul Hasan in his sppeches said in ten years ago the literacy rate of the country was 28.82 percent but now it stands at 74.7 percent.

The increased rate of education has been possible for taking various welfare programmes including compulsory primary education, sub stipend, free text book distribution to the students, development of school infrastructure, distribution of cent percent scholarships and school feedings ones by the government, the ADM also said.

To attain the cherished goals in education, sector the government led by dynamic leadership of Prime Minister Sheikh Hasina has been working relentlessly since 2009, he said adding that the government want to free the country from the curse of illiteracy by implementing literacy and non-formal education programmes.

Over 50 persons including school and college teachers, SMC members, NGO activists, town elite and journalists took part in the meeting as participants.