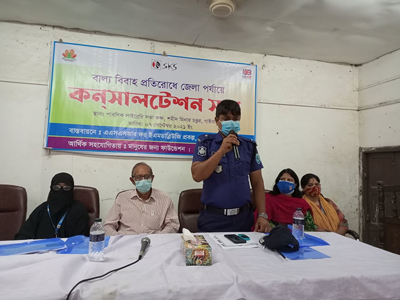 Speakers in a function here today underscored the need for preventing early marriage anyhow for national development through protecting the children from malnutrition and reduce their mortality rate.

“Social awareness and motivation is very important and essential for sustainable prevention of early marriage and child pregnancy in a bid to build a happy and prosperous country”, they said.

They came up with the comments while addressing a consultation meeting on prevention of child marriage at the hall room of Gaibandha Public Library and Club of the town here on Tuesday.

SKS Foundation, a reputed local NGO, arranged the function under its Action for Socio-economic Security and Rights for Excluded and Marginalized Women and Girls (ASSR for EMWG) Projectfunded by ManusherJonno Foundation.

The speakers in their speeches said, the government alone or any single organization is not capable to check the child marriage until all the stakeholders like officials, community leaders, teachers, public representatives, social workers, NGO activists and journalists come forward with positive attitude in this regard, they added.

Earlier, project manager Lovely Khatun delivered a welcome speech and briefed all about the overall activities of the project and also presented the challenges and potentials of the protect elaborately.

Medical officer Dr. ArminaKhatun in her speeches said child and early marriage is a curse and it has a bad impact on population growth and women’s health and also causes the untimely death of women.

Police inspector Md. Rajab Ali in his presidential and concluding speeches emphasized for stopping the early marriage in the society through raising awareness to the people including the char dwellers here and building rigorous movement in the society without delay.

The government had been implementing various programmes like free education, distribution of sub stipend and free text books, increasing number of female teachers to stop child marriage and ensure for girl children, the inspector added.