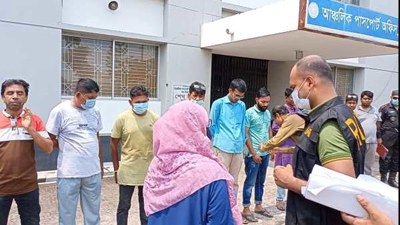 Pabna RAB raided Pabna Regional Passport Office and arrested 11 brokers. They were jailed and fined by a mobile court.

The mobile court in Pabna district sentenced 6 passport brokers to seven days jail and another 5 brokers fined of Tk 5 hundred each on charge of harassing people and realising extra money in the name of providing passports.

The mobile court led by executive magistrate Umme Tabassum handed down the verdict when RAB members produced them before the court on Sunday.

According to RAB sources, a team of RAB-12, CPC-2 Pabna camp conducted a drive at the passport office and detained 11 brokers from the office.