Husband sentenced to death for killing wife in Pabna 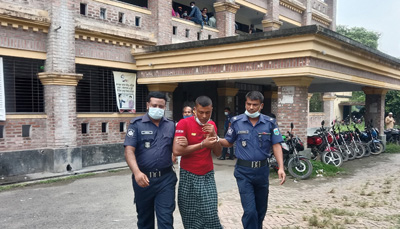 A Pabna court on Sunday sentenced a husband to death and fined him Tk one lakh for killing his wife.

The convict is Alamgir Hossain, 40, son of Hossain Ali of Bausgari village in Santhia upazila.

According to court sources, Alamgir strangled and killed his wife Tazreen on the night of September 17, 2016 for not receiving the dowry money, then poured kerosene on her and set her on fire.

Later, the victim’s brother Sabuj Hossain informed Santhia police station and police recovered the body and sent to the hospital morgue of autopsy after getting information from Tazreen’s children.

The investigating officer of the case filed a chargesheet to the court accusing the accused Alamgir ofthe murder. After a long hearing and evidence, the court sentenced Alamgir to death and fined him another Tk 1 lakh.

The judge also ordered to pay the fine to the minor’s two daughters.

The others accused were acquitted.