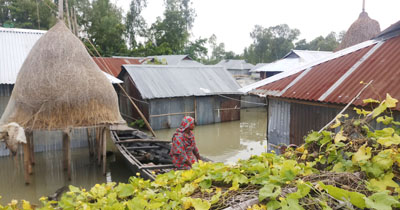 Flood situation of Ulipur,Chilmari,Roumari and Char Rajibpurupazila have deteriorated further.The flood victims took shelter to their respective relatives houses as well as on flood control embankment and leading their days in a hardship leaving their houses as those are flood affected. Scarcity of Food, Sanitation and pure drinking water is prevailing there. Fodder crisis is acute causing the cattle owners are frustrated due to vast tract of grazing fields went under flood water.

Fresh areas in these areas are being inundated and about 50 thousand people are marooned, public representatives said.

Kurigram District Relief and Rehabilitation Officer(DRRO) Abdul Hye said more than four hundred families of 13 unions under five upazilas in all the nine upazilas are marooned.