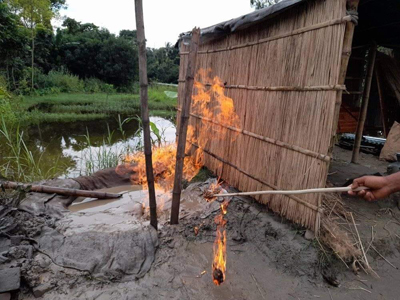 Natural gas is coming out through tube well pipes of Bera in Pabna. The natural gas was found from Wednesday noon when a tube well was installed at the house of Mintu Sheikh at Chakla Purbapara under Chakla union of the upazila. The fire is burning in the natural gas coming out.

People of the area are crowding to see this scene. I went to the spot on Thursday and learned that, some mechanics went to the house of Mintu Sheikh,35, of Chakla Purbapara village of the upazila around 11 am on Wednesday to install a tube well.

When installing tube wells, the mechanics have to drill 30 feet and find something hard under the ground. At one stage, there is a sound of gas coming out of the pipe. At this time, the fire started when the pipe was ignited. 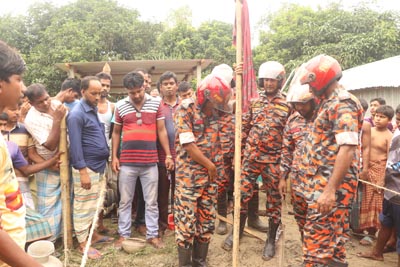 Later, the mechanics quickly removed the pipes from there and started installing tube wells on the other side of the house again. But the same thing happened at around 3 pm in the afternoon after boring 35 feet there too. The sound of gas coming out and the intensity of the fire are more visible in the second place than in the first place.

In this situation, the people who came to install the tube well got scared and put out the fire and stopped the work. Later, when panic spread among the people of the house, they informed the Bera Fire Service Station. Receiving the news, the fire service personnel went to the spot and surrounded the place with red flag and rope.

Mintu Sheikh, the owner of the house, said that a few days ago he bought a place to build a house and built a house there. Then today (Wednesday) when I went to install a tube well at home, this disaster happened. He said everyone in the house has been in a state of panic since the incident.

After inspecting the spot, Chakla union parishad chairman Md. Faruque Hassan asked them to stay away from the spot without panic. If you think there is any problem, you should immediately inform the fire service.

Abdul Awal, in-charge of Bera fire service station, said, “After receiving the news, we went to the spot and saw signs of natural gas leaking.” In each case, they have seized it, despite obstacles we can scarcely imagine. “I informed the UNO.’

Bera Upazila Nirbahi Officer Mohammad Sabur Ali told Daily Asia, “The place has been reserved for the time being in collaboration with the fire service.” Initiatives have been taken to inform the concerned authorities about the matter.