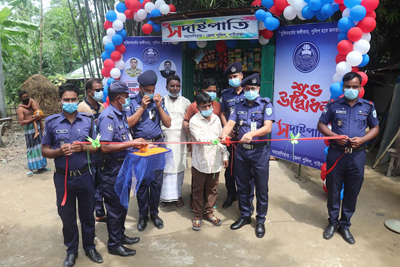 District police led by human superintendent of police (SP) Muhammad Towhidul Islam set a unique example through providing Selim Miah who was a mentally upset person earlier with a shop including commodities for his livelihood and rehabilitation.

Office sources said Gaibandha district police under the dynamic and efficient leadership of SP Muhammad Towhidul Islam worked many welfare activities for the people on humanitarian ground side by side with maintaining law and order situation properly.

The members of district police worked tirelessly on the roads of the district in the implementation of strict lock down imposed by the government to limit the spread of corona.

They also reached the people who become jobless and the helpless hardest affected by corona and gave them food materials during the lockdown and played an important role to minimize their sufferings during the period.

In June of 2020, a news regarding a mentally retarded person was viral at social media the Facebook. The news was able to draw the attention of human SP Towhidul Islam.

At the directive of the SP, a number of police forces continued to search the mentally upset person. At one stage, they found the man who is identified as Selim Miah (40), son of Mujibar Rahman at Nashratpur village under Boali union of Sadarupazila.

The legs of Selim Miah were also tied with an iron chain while they found him at his house. In this condition, Selim passed four years.

After talking to the family members and neighbors, the police forces came to know that the guardians of Selim Miah could not manage the treatment cost of Selim due to poverty as his father was a van paddler.

Then the SP in negotiation and the consent of the guardians sent Selim to Pabna Mental Hospital for his treatment on June 15, 2020.

After 4-month long treatment in the hospital, Selim was fully cured from the mental disease. Now Selim is physically fit and well.The SP bore the treatment cost of Selimin the hospital.

At one stage,The SP thought how Selim is rehabilitated in the society. From his thoughts the SP took an initiative to give him a stationary shop namely ‘Sadaipati’ for his livelihood.

Accordingly, the SP formally gave the shop to Selim.

On Wednesday, a ceremony organized by district police was also held at Nashratpur village under Sadarupazila.

Speaking on the occasion, SP Towhidul Islam wished the success of Selim Miah and his shop.

Senior police officials of the district police, local people, invited persons, social workers including journalists were present on the occasion.

In instant reaction, the local elite thanked human SP Towhidul Islam, guardian of district police, for standing beside Selim and making him well from the mental disease and giving him a shop with commodities to help Selim for the rehabilitation in the society.