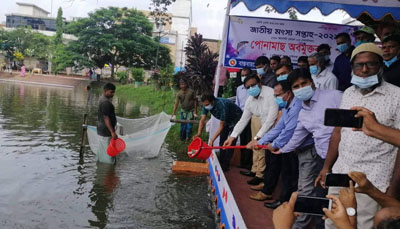 Department of Fisheries in cooperation with district administration celebrated the second day of 7-day long National Fisheries Week-2021 in the district on Saturday amid different programmes.

In the morning around 10 AM, 50 KGs of fingerlings of carp fishes like Ruhi, katla and Mrigel were released in the pond of Gaibandha Municipality of the district town at the joint initiative of district administration and Department of Fisheries.

Deputy Commissioner (DC) Abdul Matin formally released the fingerlings in the pond as the chief guest and general secretary of district Awami League Abu Bakar Siddique and district fisheries officer(DFO) Abdud Dayan Dulu were present at the event as the special guests.

Earlier, a discussion meeting was also held at the conference room of the DC here marking the National Fisheries Week with DFO Abdud Dayan Dulu in the chair.

The guests in their speeches said as the fisheries sector had been meeting 60 percent demands of the total animal protein, there is no alternative to fish production in large scale through best use of the existing water bodies in changed environment and situation.

In this context, DC Abdul Matin emphasized for building social movement to boost production of fishes to meet the nutrition demand for the growing people of the country.

DFO Abdud Dayan Dulu in his presidential speeches narrated the district level fisheries extension and development activities with highlighting the potentials of the sector.

The department had taken initiatives to fulfill the target of fish production in the district, he added. To end this, many youths including the fish entrepreneurs are being created through motivational programs in field level by the field staff of the department, he concluded.

Later, the crests were distributed to 5 successful fish cultivators of the district in the function.

Similar programs were also held at other 6 upazila headquarters in the district on Saturday marking the week at the joint initiative of Upazila administrations and upazila fisheries offices, sources said.