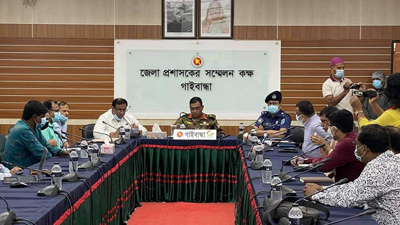 “The objective of the EPZ establishment is to boost up foreign and local investment, accelerate volume of export, create job opportunity, poverty alleviation, transfer of technology and skill development”, he also said.

EC of BEPZA Major general Md. Nazrul Islam came up with the comments while he was addressing a view exchange meeting on proposed Rangpur EPZ establishment at Bagdafarm under Gobindaganjupazila held at the conference room of Deputy Commissioner (DC) here on Tuesday as the chief guest.

The speakers in their speeches thanked the government for taking a decision to establish an EPZ in the name of Rangpur EPZ on 1842 acres of land at Bagdafarm area under Gobindaganjupazila to push forward the district towards desired development through employment generation to the youths and industrialization.

Later, EC Major general Nazrul Islam visited the proposed Rangpur EPZ site at Bagdafarm area of Gobindaganjupazila and sought whole hearted cooperation of all to establish the EPZ at the area peacefully.